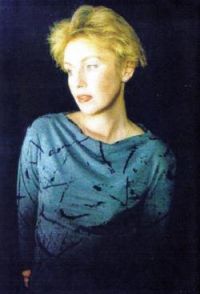 IRYNA ANATOLIEVNA ALDRICH   1958-2008
Everyone who ever knew Iryna loved her...but no one more than me.

Born in Potsdam, Germany in 1958 to her parents, Anna and Anatoly, Iryna lived in many places including Moscow and Vladivostok before moving to her beloved city of Odessa on the Black Sea in the Ukraine.  She graduated with a Red Diploma (straight A's) from Odessa University and worked for many years with Overline Trading, a cruise ship line where she served as Financial Manager and also did interpreter work for her employers during trips to other countries.

I met Iryna online (quite by accident - or perhaps not) when she was translating men's profiles for a colleague of hers from work who did not speak English.  I was single at the time and had a profile up in England.  Her friend wanted to meet a man from either the United States or England and Iryna was translating those profiles for her...but she found and kept mine for herself...finally sending a small note to me regarding our mutual interest in cats...and asked if I would be interested in writing to a woman from the Ukraine.
And that was how everything began.
We corresponded every single day for over two and a half years, writing long letters to each other...until I finally managed to make the journey to Odessa, where we met in person for the first time.

What can I say about our first meeting?

The moment I walked through the airport door and saw her standing there with a few members of her family?...
I was seeing my very best friend in the world...for the very first time.
Over the years when we had corresponded daily, I felt surely that I had already fallen in love with her...and from the first moment that I saw her, I knew that my previously unconfirmed feelings were absolutely the truth.

I spent two weeks with Iryna in her beautiful city of Odessa....
two wonderful weeks that have changed my life forever.

Iryna opened a world and a culture to me that I would otherwise never have known.  Through her, I came to know the love and the warmth of the Russian people...and the joy that I came to know, in the years that followed, by being accepted as part of her family...actually experiencing her society, her friends and her daily life...from the inside...and not just in the fashion of being a tourist.
After my return to Florida, it took a full nine months to obtain a fiancee visa, so that Iryna could come to the United States...and during her allowed three-month visit, we either had to marry...or she would have to return to the Ukraine.
Long story short...we did marry, two days before her time expired, in a civil ceremony in Clearwater...

And thus began our journey together.

Iryna found work at a wondeful local business in Florida and loved her position as a Data Entry Specialist as well as the many friendships she made while working there and felt so blessed to enjoy.  She was possessed of that remarkable and rare gift of making whomever she was talking with, feel as if they were the most important person in the world.  Her gentle and unassuming ways won the hearts of those who knew her well, and even those who met her only briefly...or even only once...and in no small measure was because Iryna had the sweetest and most genuine smile that I have ever seen;  a smile that could (and did) melt anyone's and everyone's heart.

Together, we both jumped through the hoops of the Immigration and Naturalization Service, following all of their rules, and after several years, she became a United States citizen...although she never gave up her love of her homeland or its history.
And...nor should she have.

She would always roll her eyes in amusement whenever I would tell my oft-repeated joke, "You can take the girl out of Russia...but you can never take Russia out of the girl."

In all of our years together, I never heard Iryna speak an unkind word about anyone...ever.
She was a soothing balm to my soul in times when I was prone to worrying about things, and would always tell me not to worry, adding "No matter what happens, we'll find a way to be all right"....and then, amazingly...everything was all right.    She also taught me that we have to appreciate what we have now...and to be grateful for all the good things in our lives.

And so, my dearest Iryna...this is your page.
You would always tell me how much you loved my website, and would offer your support and suggestions whenever I would make changes to it....
and now, you are a part of it.
Although you are no longer here with me physically as I type these words about you and to you....I know that you are here somewhere, and that you are looking at them and smiling at me, the way you always did.
Not a moment goes by that you are not with  me ...and that is how it will always be....
because that is the way it always was....and how it will be again when my work here is through.
I now know that it was your time to leave, because there was work for you somewhere else;  some place that I can not see, but somewhere that there is life....and some place where your special skills were and are needed.

I often think that I will never be able to go on without you....
but then I "catch myself" feeling you smile at me; and encouraging me to go on....
It's just who you were....and it's just who you are.

And....as I said before...
Everyone who ever knew Iryna loved her...but no one more than me.